Western theme parks in CZ and PL -- catching up


I can't believe it's been nearly a year since I updated this blog... time seems to fly faster and faster and, well, I'm lazy...and then again it's easier just to post links on the Facebook page... But I'll try to do some catching up in the next few days....

I managed to get to two of them this summer -- "Twin Pigs" in Poland, and the Western Park (once called Wild West City) outside Boskovice in the Czech Republic. 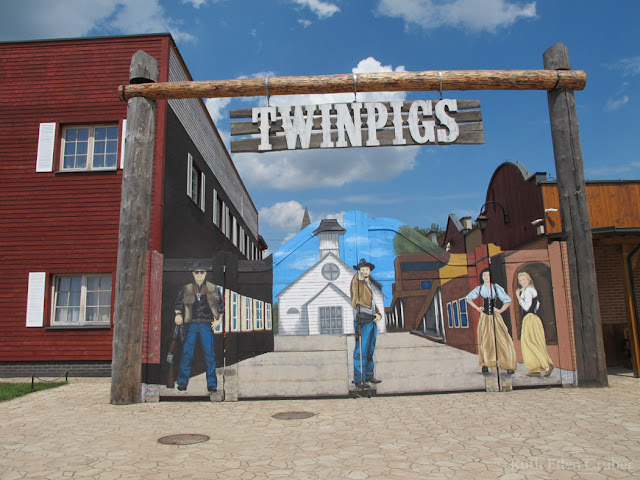 I've visited a number of wild west theme parks in Europe over the years -- they are key elements in the Imaginary Wild West. Real Imaginary spaces that have grown out of dreams, passions, stereotypes, and yearnings -- but also help create them.

This was my first visit to Twin Pigs -- but the latest of several to Boskovice.

The Boskovice park was founded in 1994 as a private initiative by a local man, Luboš "Jerry" Procházka, who developed the park in a natural setting in and around a disused sandstone quarry. The first time I visited -- in, I believe, 1997 -- it was out of season and the park was closed; I could only look at it over a fence. But I was struck by the view of the saloon and other movie-set buildings.

At that time, I was researching my book "Virtually Jewish" -- about the relationship of non-Jewish people to Jewish culture in Europe. I wrote this in an essay published at the time in The New Leader magazine (and also in my 2008 book "Letters from Europe (and Elsewhere)"):

Some people compare Europe's current interest in Jewish culture with the United States' interest in Native Americans. To be sure, I have seen Indian dolls wearing beaded costumes for sale in the Denver train station that reminded me of the "Jewish" puppets and figures I have photographed in Prague, Krakow, and Venice.

I was not surprised, therefore, by two posters I found on display in the Boskovice tourist office. One is for a jazz festival whose proceeds are to go toward renovation of the Jewish quarter. The other advertises a rodeo at a place called "Wild West City: Boskovice's Western Town." It features photographs of people dressed up like American Indians riding horses, with corrals, rickety wooden structures and even tepees in the background. A handbill shows a seductive Indian maiden looking over her shoulder.

I found Wild West City on my map, the edge of Boskovice, and stopped there on my way out of town. It is a theme park set up in an old quarry that resembles a stage set from a John Ford movie, replete with a flimsy wooden saloon and general store. A sign at the entrance reads, "Indian Territory." Another notes the kilometers to various spots in the American West -- most of them spelled incorrectly. It's off-season The place is deserted. The only sound is that of hoofbeats, as a costumed employee rides a horse round and round the repro corral.