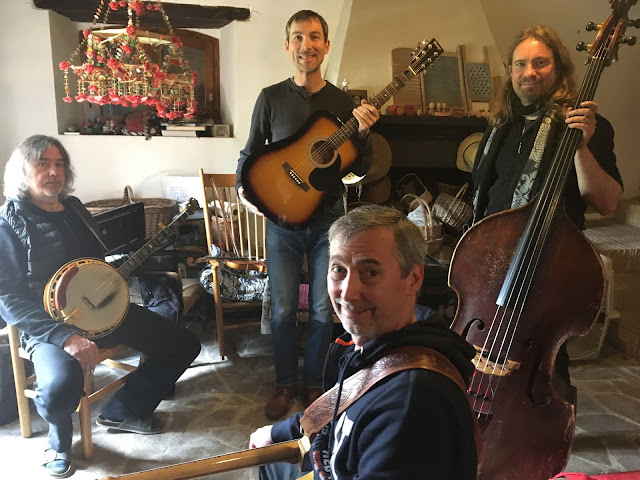 My last post took note of a concert I attended in April  by the Czech bluegrass band The Malina Brothers, with guest appearances by Charlie McCoy, the Nashville-based harmonica virtuoso and member of the Country Music Hall of Fame, and the Czech singer Kat’a Garcia. The concert was sold out, and got a prolonged standing ovation from the crowd. And it was being filmed for a live show DVD.

That concert took place in the Sono Center, a major venue in Brno, CZ, for contemporary music -- the audience numbered 700 or 800.

Less than a month later,  the Malina Brothers, who are old friends of mine, visited Italy -- where they  gave a house concert at the home of a friend.

I managed to live stream it  from my phone, on Facebook -- and here it is. It was my first live streaming, so the visual quality is not the best (and it's vertical -- the program didn't let me rotate the phone)... but still. It's a testament to their talent that their same repertoire works in a big theatrical venue like the Sono Center -- and also in the intimate setting of a private living room.


Posted by Ruth at 1:10 PM No comments: Links to this post