The death of a towering figure....many obituaries, but I am posting the link to the obit by Peter Cooper in the Nashville Tennessean


A quietly affable presence, Mr. Scruggs popularized a complex, three-fingered style of playing banjo that transformed the instrument, inspired nearly every banjo player who followed him and became a central element in what is now known as bluegrass music.

But Mr. Scruggs’ legacy is in no way limited to or defined by bluegrass, a genre that he and partner Lester Flatt dominated as Flatt & Scruggs in the 1950s and ’60s: His adaptability and open-minded approach to musicality and to collaboration made him a bridge between genres and generations.

Rather than speak out about the connections between folk and country in the war-torn, politically contentious ’60s, he simply showed up at folk festivals and played, at least when he and Flatt weren’t at the Grand Ole Opry. During the long-hair/short-hair skirmishes of the ’60s and ’70s, he simply showed up and played, with Bob Dylan, Joan Baez and The Byrds. And when staunch fans of bluegrass — a genre that would not exist in a recognizable form without Mr. Scruggs’ banjo — railed against stylistic experimentation, Mr. Scruggs happily jammed away with sax player King Curtis, sitar virtuoso Ravi Shankar, piano man Elton John and anyone else whose music he fancied.

“He was the man who melted walls, andhe did it without saying three words,” said his friend and acolyte Marty Stuart in 2000.

Read full article
Posted by Ruth at 10:33 AM No comments: Links to this post

The OK Corral is in the south of France, at Cuges-les-Pins between Marseilles and Toulon.
Posted by Ruth at 11:16 PM No comments: Links to this post

I'm not sure about this......(by Jeremy Scott and Adidas) 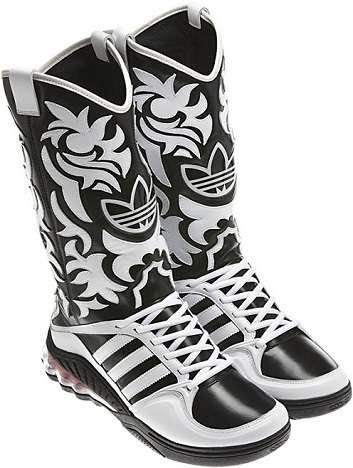 Email ThisBlogThis!Share to TwitterShare to FacebookShare to Pinterest
Labels: clothing

UK -- Cowboys and Cowgirls to Perform for Queen Elizabeth's Jubilee

A group of cowboys and cowgirls from California will take part in celebrations in May to mark Britain's Queen Elizabeth's Diamond Jubilee, performing a 6-minute wild west show at Windsor Castle.

Queen Elizabeth II will celebrate her Diamond Jubilee — 60 years of reign — with a 90-minute show focusing on equestrianism throughout the world. And representing North America is a group of cowboys and cowgirls who will look to impress the queen with an entertaining, yet authentic look at the American West. "The queen was specific, she wants real cowboys at her party," said Clay Maier, who is organizing the North America portion of the show. "We've been working on this for two years to get it right. We want to be authentic."

The performance will hark back to Buffalo Bill Cody's Wild West show's command performance before Queen Victoria  on May 11,  1887, during celebrations that year marking Victoria's Golden Jubilee.

Buffalo Bill's Wild West, including his full crew of 97 American Indians, 180 horses, 18 buffalo, and, of course, Chief Sitting Bull, Geronimo, and the sharpshooter Annie Oakley, was the central attraction in London's American Exhibition in Earl's Court. Two days after its opening, Queen Victoria visited the exhibition for a private showing of the Wild West.

That the event did not take place in Windsor Castle, requiring Her Majesty to travel to see it, was remarkable. Cody thusly explained in a press release: This show "was altogether too big a thing to take to Windsor Castle, and as in the case of Mahomet and the mountains, as the Wild West Show could not go to the Queen it became absolutely necessary for the Queen to go to the Wild West Show if she desired to see it, and it was evident that she did."

As Robert Rydell and Rob Kroes put it in their 2005 book Buffalo Bill in Bologna: the Americanization of the World, 1869-1922, it was the first time since her husband Prince Albert had died 25 years earlier that Victoria had appeared at a public event.

Her attendance at the Wild West show was news everywhere in the English-speaking world, and the fact that she made her apperance in the context of the celebrations that marked the Jubilee Year of her reign only added more weight to the occasion. And what an occasion it was. When the show began and a rider entered the arena carrying the American flag, Queen Victoria stood and bowed. The rest of the audience followed suit, while British soldiers and officers saluted. As Cody described the moment:

"All present were constratined to feel that here was an outward and visible sign of the extinction of that mutual prejudice, amounting sometimes almost to race hatred, that had severed two nations from the times of Wahsington and George the Third to the present day. We felt that the hatchet was buried at last and the Wild West had been at the funeral."

Posted by Ruth at 7:25 PM No comments: Links to this post

Robert Temple Ayres, the artist who painted the original Ponderosa map featured on the TV show Bonanza, has died. The Autry Center blog reports that he passed away on February 25 in Los Angeles at the age of 98.


As for his painting of the Ponderosa map that opens the credits to Bonanza, the NBC series that ran from September 1959 to February 1973, for years it was one of the most recognized maps in the world. Audiences saw it briefly appear every week before it burst into flames and dissolved into a shot of the members of the Cartwright family on horseback, as the twangy theme played. It was donated by the family of David Dortort, the show’s producer, and has been hanging in the Autry’s Imagination Gallery since May 201Even though Ayers worked with some of the biggest names in the business, including Elvis Presley at the peak of his fame, the artist never took the Hollywood hoopla seriously. He didn’t know the map had survived the series until shortly before he came to see it with his family in July. As a family member led him to it in his wheelchair, he exclaimed his surprise. “Oh, for goodness’ sake!” Ayres said.”I had no idea where that had gone.”

Posted by Ruth at 7:05 PM No comments: Links to this post