I shot this little video at the Cowboy Action Shooting match during the Old West Shooting Society convention October 10-11 at Boario Terme, Italy. The theme of the match was "Smoke in the Rocky Mountains."

Posted by Ruth at 7:37 PM No comments: Links to this post

There's an interesting interview online with the British singer Pete Molinari, currently recording country music covers for a CD in Nashville, about what attracted him to American roots music and country music.

I grew up in a big family with many older brothers and sisters. My folks liked the tradition of things and were not much accustomed to the modern change in things when it came to music and art and food (wise people). I learnt much from my older brother’s record collection. Always getting a vinyl to spin from them on my little record player (that I still have), they were into rock and roll mainly –Sun Records, and Chess. Also country records that seemed to paint my childhood with bold colors.


Something happened to me listening to those Chet Atkins records and Owen Bradley recordings. I would stare into the vinyl spinning, like it was the portal to some other world (and it was). As a child, you don’t ask who wrote what, who produced what, who even sang what (that all comes later), you just listen to the sound. That voice of Billie Holiday’s or Patsy Cline’s. I was really lucky. I was only into drawing pictures and listening to music. The British music scene didn’t influence me as much, great as it is. It didn’t make an impact upon my spirit the way American music and literature did.


Read full interview at www. americansongwriter.com
Posted by Ruth at 9:56 AM No comments: Links to this post

BBC on the persisting cowboy.... 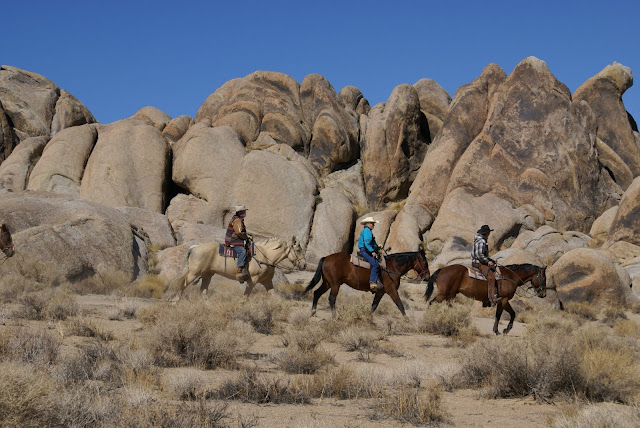 A BBC correspondent draws on his youthful fascination with the Wild West to write a report on present-day cowboys.


...there are still cowboys all over the West, from North Dakota down to New Mexico, partly because there is still some rugged terrain where the horse remains the best way of getting around.
But it is also partly because the cowboy embodies many of the characteristics which Americans see as part of their identity - the tough, self-reliant figure riding alone who tamed the unconquerable wilderness from which America drew its wealth.

How much longer that lifestyle will survive on the ranch rather than the tourist heritage park is hard to say, of course.

But not for the first time, the cowboy finds himself staring towards a far horizon, wondering what challenges lie beyond it.


Read (or listen to) full report
Posted by Ruth at 11:11 AM No comments: Links to this post 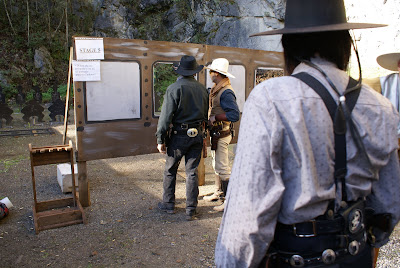 I travelled to northern Italy last weekend -- to the spa town of Boario Terme -- for the annual convention of the Old West Shooting Society, the Italian branch of the American SASS -- Single Action Shooting Society. I went to the Convention last year -- see my blog post about the experience -- and have since become a member -- my OWSS/SASS name is "Miz Flora," in honor of my Texas-born grandmother.

I arrived at the Hotel Castellino just in time to change into my "wild west" duds -- not a very elaborate costume, compared to some: mainly a slightly old fashioned fitted black linen jacket with leather buttons, over a long, off-white linen skirt, with a lace hairband, cameos, and cowboy boots.

There was an awards ceremony, presenting prizes for the Cowboy Action Shooting competitions throughout the past year, and then a four-hour dinner with more courses than I can remember to count. 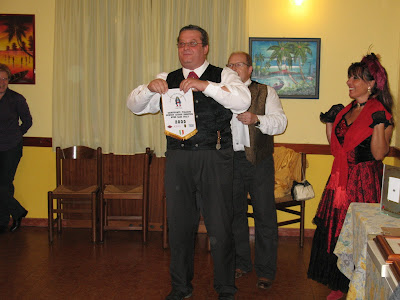 
Part of the evening was devoted to remembering the former president of the OWSS, who died suddenly this year when at a SASS international gathering in the US. 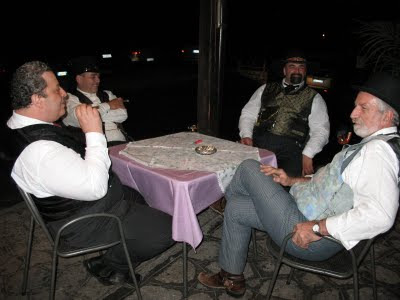 At dinner, I sat next to Federico Polidori (AKA Frederick Holstermaker) -- an artisan in leather, based in Rome, who produces beautifully tooled holsters, bags, saddles and other goods.  I had known him in Rome in the 1980s, and had encountered him for the first time since then at the OWSS convention last year. 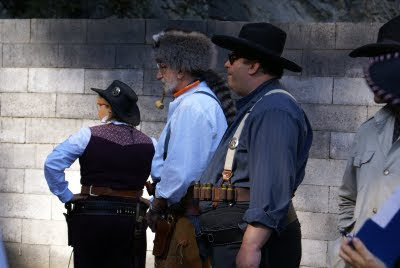 On Sunday morning, as last year, there was a Cowboy Action Shooting competition -- at a gorgeous firing range set high up a mountain slope above Boario. I could only stay briefly, as I had a long drive home -- and also, I had forgotten to bring earplugs. Those guns are loud! 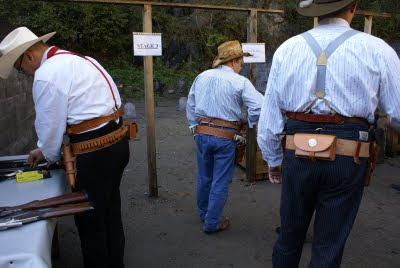 Posted by Ruth at 4:31 PM No comments: Links to this post

Emilio Salgari -- the Italian Karl May 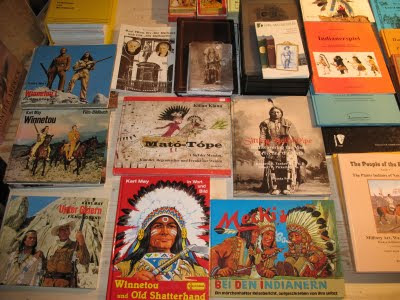 Books displayed at the Karl May Festival in Radebeul, Germany, May 2008. Photo (c) Ruth Ellen Gruber

I had dinner the other night with an Italian friend who worked in film for many years. He recounted his love of westerns and the fascination with the Wild West he had had since childhood. I asked him how he had first become interested in the West, how it had captured his imagination. The answer? The stories by Emilio Salgari -- a 19th century Italian adventure writer who can be called the Italian Karl May.

Salgari, who was born in 1862 in Verona and committed suicide in Turin in 1911, was, in fact, an almost exact contemporary of May, the German writer who created the iconic Western heroes Winnetou and Old Shatterhand. And, like May, Salgari wrote adventure stories set in the Middle East and elsewhere as well as Western tales. (He is, in fact, bestknown for creating the character Sandokan, a Bornean prince turned pirate: the Sandokan tales were turned into many movies and an inconic television series.)

Also like May, Salgari rarely traveled -- he created his swashbuckling, incredibly detailed and wildly popular worlds from his imagination, based on books, encyclopedias and other reading. Karl May never visited the American West -- his one trip to the U.S. came in 1908, four years before he died and decades after he had created Winnetou, and he never went further west than Niagara Falls.

Salgari, it seems, never ventured further than the Adriatic Sea.

There has been considerable study on Karl May -- in English as well as German. But Sagari, and particularly his western stories, remain largely unknown in the English-speaking world. As do the dozens of other European authors who produced hundreds -- thousands? -- of westerns in the 19th and early 20th century.

The Brigham Young University scholar Richared H. Cracroft  writes in detail about these writers in his chapter "World Westerns: The European Writer and the American West" in the huge volume A Literary History of the American West, sponsored by the Western Literature Association and published by Texas Christian University Press in 1987.


From the steppes of Russia and the cities of Poland and Italy to the villages of the Spanish plains, the zest for literature of the American West continued through much of the nineteenth century. This fervor, centered primarily in Germany, spilled over the borders of German lands into every nation of Europe. In every case, the western works of popular German writers, including those already considered, and others not considered (such as the fifty-nine western adventures of Wilhelm Frey, or Fricks), thrilled Europeans from Holland to Greece. Nineteenth-century Norwegians, for example, elevated Frey and Möllhausen to top position among their nation’s most popular writers and read the translations of English Western author Mayne Reid as well. And in the twentieth century Karl May continues a best seller in many European nations.

Posted by Ruth at 12:22 PM No comments: Links to this post

The Associated Press runs a story about the Imaginary Wild West in Germany. It covers, of course, all the ground I've been covering in this blog and various articles over the years. It focuses more specifically on the connection with Texas,


"The picture of Texas as a Wild West country with cowboys is very strong in Germany," says Claudia Baierl, who has been contracted by the Governor's Economic Development and Tourism division in Austin to help promote the state in Germany.

In recent years, Texas tourism officials have increased advertising in German news media and on the Internet.

"There's a lot of interest in us right now," says Julie Chase, chief marketing officer for the state's Economic Development and Tourism division, noting that Germany is the fifth-largest source of international visitors to Texas. Some 77,000 visited the state last year, the most since 2003.

The article mentions Old Texas Town, the nearly 60-year-old cowboy club in Berlin, which I visited at the end of 2007.

At that time, "Ben Destry" (real name Fritz Walter) -- one of the original founders of the club -- was its "Mayor." 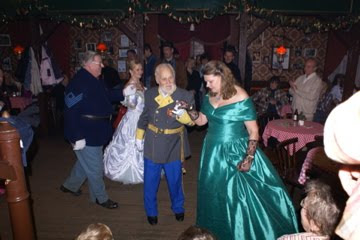 "Destry" was a courtly man in his 80s, who spoke almost no English, but loved the American West and Texas -- he dressed up in both Union and Confederate Civil War costume -- and was particularly fascinated by the Alamo. There is monument to those who died at the Alamo in the Old Texas Town grounds.

Ben's  death earlier this year closed a long, intense personal chapter of Germany's Imaginary Wild West. But O.T.T. itself seems to have overcome some of the financial and other problems that threatened to close it, and the town, at least through this year, remained open to the pubic the usual first Saturday of each month. (It is closed in January ad February).
Posted by Ruth at 10:36 AM No comments: Links to this post

The award-winning Slovak country singer Peter Dula  died Oct. 10 after a long battle with cancer. He was only 28, and his death is a real loss to the European Country Music scene.

Since 2004 Dula had fronted the band Veslari -- "The Rowers," Slovakia's oldest country music band. With Dula singing, the band won a Slovak Grammy and other numerous  awards including the best European country band of 2007. They also played at the Grand Ole Opry in Nashville.

The following is from one of Dula's web pages:


They broke the European airplay record when the single "I’m Leavin’" spent consecutive 14 weeks at the top of the ECMA chart. Peter & The Rowers swept the board at the 2007 European CMA awards taking home 6 awards along with the most prestigious “Artist of the Year” award. Peter’s songs are dominating the major European country charts and he and his band are extensively touring Europe. It's like a dream come true.

Since the beginning of 2008 Peter has been battling cancer again but that did not stop him. He is still trying to perform , record and write songs. In spring 2008 Peter recorded a duet with country legend and Grammy winner Joe Diffie. Their song "Long Gone Loner" made it to no.1 on the major European Country Music Chart and to no.3 on the prestigious HotDisc International Chart.