Imaginary Wild West: A Point of Origin..... (and a childhood heart-throb)

Yesterday, I went to the festivities celebrating the 75th anniversary of Republic Pictures, the old movie studio that produced Gene Autry and Roy Rogers movies, as well a host of other cinematic B-westerns -- and thus and major point of origin in the creation and marketing of the imaginary Wild West.


Founded in 1935 by Herbert J. Yates, Republic Pictures was an independent film production-distribution corporation with studio facilities. Republic exploded into national prominence with its focus in westerns, movie serials and B-films emphasizing mystery and action, the staples of Saturday afternoon matinees. The studio launched the careers of John Wayne, Gene Autry, Rex Allen, Roy Rogers, and rocketed serials like The Adventures of Captain Marvel and Commando Cody: Sky Marshal of the Universe into the public imagination. Notable Republic Pictures include Under Western Stars (1938), Flying Tigers (1942), Macbeth (1948), Sands of Iwo Jima (1949), The Red Pony (1949), The Quiet Man (1952) and Johnny Guitar (1954).

It was a sort of fair/festival set up at the studio, now CBS studios, in Studio City. Oddly, there seemed to be very little publicity for the event, and it was even hard to find where to enter -- there did not seem to be any signage pointing the way.

It was a brutally hot day -- 104 degrees F -- and that may have deterred people from attending: I was surprised at how empty it was (though the air-conditioned panel discussions and memorabilia/autograph hall were crowded).


Much of it reminded me of western festivals in Europe -- though on a smaller scale. There were people dressed up in old time western costumes, and  stands selling western goods and duds


And a couple of country-western bands

My biggest thrill, though it was sort of poignant, too, was to come across Hugh O'Brian, the actor who portrayed Wyatt Earp in the icon TV show of my childhood, sitting in the autograph/memorabilia hall, selling his autograph, autographed pictures and other material. He was a Wild West hero of mine, and it was all I could do to stop myself from bursting out into the Wyatt Earp theme song...."Long may his fame and long may his glory and long may his story be told!"

O'Brian is about 85 now, and looks great; but he was surrounded by the glory of his swashbuckling youth, and I find myself rather squeamish at the sight of one-time stars, in their "twilight years", selling their signature for $20 a pop. Of course, why shouldn't they?  (O'Brian also has a web site where he sells memorabilia and also offers to make personal phone calls.)

Posted by Ruth at 6:50 PM No comments: Links to this post

Just in time for my lectures in LA next week, I've found out about some Line Dance and imaginary wild westers in Italy. These include Etna Country Style and Tweety Country in Sicily, which have ample youtube sites with lots of videos.

Will have to check the out when I get back from the Real American west.

Oh -- and I found out about  Wild Country Roma  from a country music Facebook friend in France.... and here they are in a Line Dance competition in Spain....

Posted by Ruth at 4:37 PM No comments: Links to this post 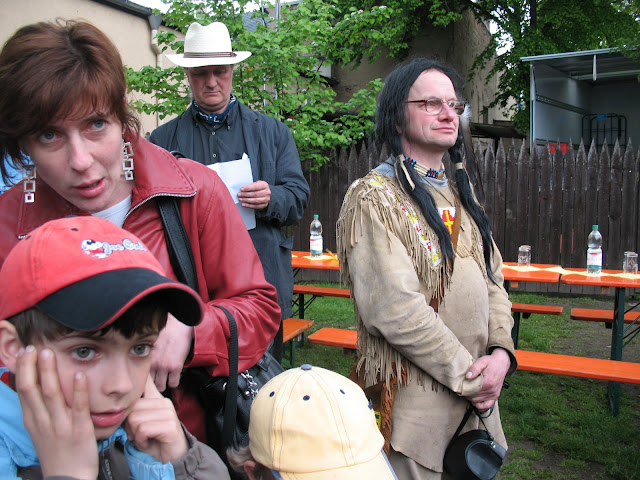 Karl May Festival, Radebeul Germany, 2008. Photo (c) Ruth Ellen Gruber
Heads up to any readers in Los Angeles --  I'm giving a public lecture at UCLA on Sauerkraut cowboys at UCLA on Sept. 30

Posted by Ruth at 6:53 PM No comments: Links to this post

The web site is in Slovak, but you can get an idea of what's what by looking at the pictures. The ranch offers guest accommodations, rodeos and other horse-riding competitions, "horse therapy" and other activities.

The name, "Silver Lake," harks back to one of the bestknown Winnetou tales by Karl May, the Treasure of Silver Lake (Der Schatz im Silversee). This was the title of the first Winnetou film starring Pierre Brice, Lex Barker and Herbert Lom, release in 1962.

And here's the English trailer:

"Silver Lake City" was the name of a short-lived wild west town near Templin, north of Berlin, Germany (which currently operates as Eldorado).

Heads up for the 8th French Country Music Awards next month!

The ceremony takes place Oct. 23.
Posted by Ruth at 11:49 PM No comments: Links to this post

David Dortort, the pioneering television producer who created the iconic western show Bonanza, died Sunday at the age of 93.

The Autry National Center runs a lengthy obituary of him on its blog. I had the pleasure and privilege of conducting a lengthy interview with Dortort when I was a Visiting Scholar at the Autry -- I do not have a copy of the interview with me at the moment, but when I do I will post some excerpts. Meanwhile, you can watch a three hour interview with him conducted in 2002 for the Archive of American Television by clicking HERE

Bonanza, a ground-breaking "adult western" that focused on the life of a family of men on the Ponderosa ranch near Virginia City, was one of the most popular TV westerns of all time -- shown in dozens of countries and dubbed into local languages.


Considered Dortort’s most important work, “Bonanza” became one of the most popular and the second longest-running western on television, with 425 episodes airing from 1959 to 1973. The family saga of thrice-widowed Nevada rancher Ben Cartwright, his disparate sons, and their vast landholdings also was the first of a new genre at the time — the adult western.

“Prior to that particular time, most of the Westerns that you saw on TV were geared toward children,” said Jeffrey Richardson, the Autry’s associate curator of film and popular culture. “These were shows like ‘The Gene Autry Show,’ ‘Roy Rogers,’ ‘Sky King,’ those types of shows, which were very simplistic in their message.”

With the adult Western, Richardson said, television was able to tackle more controversial issues and social themes — topics that resonated more with what was going on in the United States in the1960s, rather than in the 1870s.

“The issues that they’re dealing with in the standard ‘mission of the week’ were issues that were relevant to people in the 1960s,” Richardson said. “Gender was one. Race. Society and the role of the ‘big guy.’ “

I remember that when I checked into the "Colorado" hotel on my first visit to the Skluv Mlyn wild west town in the Czech Republic, the theme song from Bonanza was being played in the background -- sung in Czech.

Similarly, Dortort's papers, which he donated to the Autry, include fan letters -- one of them is from  a German filmmaker in Berlin


"who tells Dortort he was walking along the Wall on the West side one day when he heard someone on the East side whistling the theme to “Bonanza.” “He talked about the irony of it,” said Marva Felchlin, director of the Autry Library. “That says something about the allure of the West.”

Posted by Ruth at 3:06 PM No comments: Links to this post

The summer Karl May festival season is ending, and the biggest and oldest KM Festival, in Bad Segeberg in northern Germany, reports that it had its third most successful season ever --  307,787 visitors came to see its open air production of "Halbblut" starring Erol Sander  as the Apache chief Winnetou, Eva Habermann  as Kitty LaBelle and Ingo Naujoks as Charles Leveret.

The season, as always, ran from late June into early September. The number of spectators was a bit lower than the record set last year, when The Treasure of Silver Lake drew 320,339 people. It was the first time in the nearly 60-year history of the festival that the audience has topped 300,000 two years in a row. (The person who bought the 300,000th ticket sold this year received a prize of €3,000.)

Next year the Bad Segeberg festival will celebrate its 60th year jubilee, premiering a production of The Oil Prince on June 25.

Bad Segeberg is the most venerable of about a dozen summer festivals in Germany, Austria and elsewhere in central Europe that feature open-air productions of plays based on the stories and characters of Karl May, the German adventure writer who created the most enduring Wild West characters in Europe. May died in 1912 and never visited the American west -- on his one trip to the USA, in 1908,  the furthest west he got was Niagara Falls.
Posted by Ruth at 5:29 PM 2 comments: Links to this post