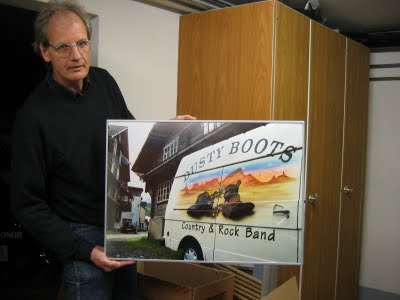 I want to point out the new web site -- www.geristocker.ch -- of my friend Geri Stocker, a Swiss photographer who also produces the main country music show on Swiss Radio. Geri has spent years documenting what he calls "Swiss America" and "Amerikanische Schweiz" -- that is, sometimes jarring juxtapositions of stereotypically American or Swiss images in the context of the other country. 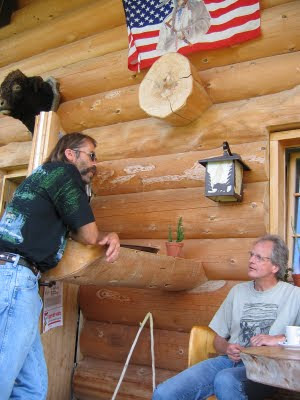 Geri Stocker talking to "Sioux," the proprietor of the Dream Valley saloon in Switzerland. Photo (c) Ruth Ellen Gruber
I met Geri several years ago at a country music and trucker festival in Switzerland, when he also took me to the Dream Valley saloon, up in the Alps. We instantly bonded through our interest in the play of stereotypes and embrace of mythology that we observed -- I also take the same sorts of images that Geri photographs, without concentrating on one country. 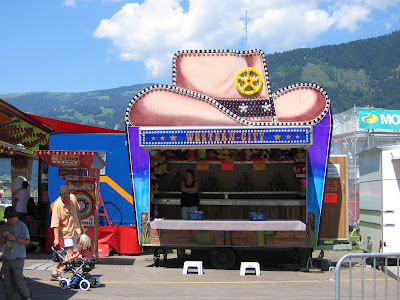 Interlaken Trucker and Country festival, 2004. Photo (c) Ruth Ellen Gruber
I later wrote about Geri and his work in the International Herald Tribune:

For the past several years Stocker has been documenting what he calls "American Switzerland," that is, the myriad ways in which an American presence visually encroaches on traditional Swiss settings via billboards, advertisements, cars, flags and other publicly displayed signs and symbols.

In doing so, he has produced a striking series of images that are carefully framed to showcase a sometimes surreal juxtaposition and at the same time turn time-honored clichés on their head.

In one picture, for example, a leathery cowboy seems to be leading a horse through a wide-open Western landscape that stretches out under the corrugated roof of the Basel train station.

In another, a hand-written sign set in an idyllic pasture points incongruously to "Dodge City," while two cows graze in the background.

Another shows a modern high-rise tower dwarfed by an enormous stag's skull nailed to a dead tree in a sweeping desert landscape.

The cowboy is on a Marlboro ad; Dodge City is a local restaurant. And the stag skull is a fragment of a poster for an exhibition of paintings by Georgia O'Keefe.

"A lot of people think that I manipulated the images with Photoshop or whatever," Stocker says. "I think what people trip over is that I take what in reality has three dimensions, and I put them in two dimensions, so it looks like a photo montage."

In fact, Stocker focuses on American imagery, objects and symbols that are so pervasive that for most people — in Switzerland and elsewhere around the globe — they have become unremarkable components of the local vernacular.

He makes these things notable by spurring local people to recognize — and question — their relationship with American dreams.

"Several people told me that when they saw the pictures at first they were kind of surprised because they had never seen that Swiss/American contrast displayed so starkly," Stocker said. "And a lot of people have to laugh or smile. They say, 'Oh yeah, of course you can see it that way, but I've never paid attention."'

He added, "Maybe living in a small country, we like to have and see the idea of a geography and a countryside that is much larger than what we get — hopefully larger in the mind. And, of course, those American images of wide open spaces, cowboy country or big cars are images that awaken those dreams or ideas."

Stocker began taking his photographs in response to his own lifelong fascination with the United States and its pervasive influence.