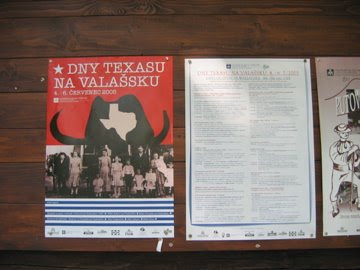 As I reported earlier, the virtuoso harmonica player Charlie McCoy is being inducted into the Country Music Hall of Fame. An article about him in a Ft. Myers Florida paper describes him as

one of the most recorded, most influential musicians in Nashville. And he’s virtually unknown outside Music City, USA.

I write about Charlie on this blog because he is quite wellknown in the country music scene outside the USA. He tours regularly in Europe and elsewhere, and he makes a point to play with European bands (like my friend Steve & Heather in France and Druha Trava in Czech Republic) and also records with them.

I met him back in 2005 when he was touring with Druha Trava -- the concert I saw was at a "Days of Texas" festival in the little town of Roznov pod Radnostem, in eastern CZ. 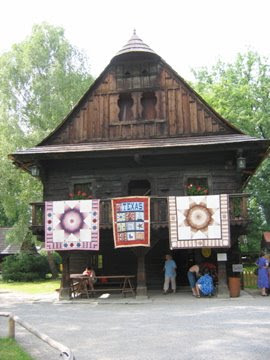 Texas quilts in Ethnographic museum. Roznov pod Radnostem, CZ. Photo (c) Ruth Ellen Gruber
As I wrote in the International Herald Tribune (the link has expired), the setting was the Wallachian Open-Air Museum,

a sprawling complex dedicated to the preservation of local folk traditions and architecture. And the festival highlighted the fact that from the mid-19th century until World War I, thousands of people emigrated from Roznov and other towns and villages in the region to the Lone Star State. Today, Texas has the largest ethnic Czech community in the United States.

There were demonstrations of 19th century farming customs used by the emigrants, and performances by American-style Czech country-western groups as well as by local folk groups performing Wallachian songs and dances. An exhibition of quilting featured local designs as well as a big patchwork quilt reading "Texas," hung prominently from the upper floor of the old Roznov Town Hall.

I felt an immediate connection. My own great-grandfather immigrated to Texas from Lithuania in the 1880s, my mother and grandmother were both born there, and I had relatives who lived in some of the heavily Czech Texan communities.

Near Roznov, I made it point to visit the village of Lichnov, where a private little museum documents the Wallachian exodus with an exhibition called "Hope Has a Name -- Texas." It is a genealogist's paradise of archival records, photographs, maps and memorabilia tracing family histories on both sides of the Atlantic.

It was rather poignant to see how the immigrants, building new lives in a new world, named raw new prairie settlements after their ancient Czech hometowns and, in many cases, maintained at least some of their native customs and even a command of the language.

Indeed, the then-Mayor, Vaclav Mikusek, recalled his surprise when he first met descendents of Wallachian immigrants to Texas about 15 years ago. "There was one man whose ancestors had come from a village near Roznov, and when he started to speak Czech, it was like I was hearing my grandfather," he told me. "He was using the same words, same expressions. We were discussing it in the museum," he said. "Anyone who wants to hear a pure Wallachian dialect must go to Texas."