Equiblues was one of the first European -- and the first French -- country western festivals I went to in 2004, when I first started following the scene. That first experience was tremendously eye-opening, a lot of fun, and introduced me to a lot of people and ideas -- and I'm sorry that it has taken me so long to get back here again.

Equiblues -- now in its 17th edition -- takes place outside the little town of St. Agreve, in the Ardeche area of south-central France. It is one of the rare examples of a country western festival that also includes a full-scale rodeo, as well as concerts (under a big, red-white-and-blue tent) and the so-called "western market" of booths and activities.

The rodeo was just about over for the day when I got there, but the long, late afternoon shadows made for some nice images:

I've noted before that it was at Equiblues in 2004 that I saw and photographed -- but alas didn't buy -- the iconic "Heritage Authentic" T-shirt whose imagery (truck, Monument Valley, shaman, Native American chief, made in France label) encapsulates a lot of what the imaginary wild west is about. 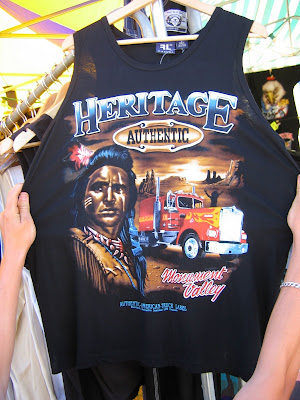 I haven't run across this T-shirt design since, though it has long been my goal -- almost an obsession -- to find it and actually buy it. I looked through all the booths at Equiblues last night, but came up again empty.

Examining all the booths like that demonstrated how merchandise has change -- in fact, the changes in the Equiblues scene are what I have been noting.

It seems both "bigger" and "smaller". The Western market seems more crowded -- but less "western." More booths, but far fewer "western" booths -- and far far fewer western T-shirts, and much more generic kitsch and other "stuff." People didn't seem as "dressed up" western as before, either -- aside from ubiquitous hats and boots (including on my own feet).

Remarkably, there did not seem to be one booth where you could buy country music CDs or DVDs. There also seemed to be a lot less "Stars and Bars" confederate imagery -- and what was there seemed more decorative than, shall I say, ideological.

I reconnected at Equiblues with Georges Carrier -- who recently announced he was stepping down as the director of the great Country Rendez-vous festival at Craponne. (See my blog post on this.)  George will be started a sort of agency as a middle man for bands and festivals -- he told me it will be a non-profit organization, just to help his friends and acquaintances make contact with each other and spread the music.

I also reconnected at Equiblues last night with Didier Cere, a French rocker and biker with heavily tattooed arms, whom I met at Equiblues the first time round and haven't seen since (though we're friends on Facebook). His southern rock band, the Bootleggers (pronounced here Boot-laigg-AIRS) opened the more than 3-hour concert under the tent with a with a rousing set.

The other acts were the American singer-songwriter Brennan Leigh and Canadian Dean Brody.