The Autry National Center in Los Angeles now displays one of the most potent icons of the post-World War II imaginary wild west -- the map of the fictional Ponderosa ranch that was displayed and set on fire at the beginning of every episode of the long-running and internationally popular TV show Bonanza.

The map -- which has been hung in the Autry's "Imagination Gallery" -- charts a  place that doesn't exist but is recognized and even beloved by millions world wide. As the Autry blog puts it:


NBC audiences from September 1959 to February 1973 saw this map every week in the opening credits of the Paramount Television show. It would appear briefly before it burst into flames, dissolving into a shot of all four members of the Cartwright family, astride their horses, as the memorable theme played. “We’re talking 14 seasons, 431 episodes,” said Jeffrey Richardson, associate curator of western history and popular culture at the Autry. “Just those numbers alone are staggering. But at the beginning of every single episode, and the theme song that so many people can hum, it all began with a shot of this particular map.”

The burning map was a high spot for viewers, but Richardson notes that it actually was drawn with an incorrect geographical orientation.

The map is a beauty, hand-drawn in intense colors for Bonanza creator David Dortort by Robert Temple Ayres, a company employee. But it has a flaw. When Ayres drew the map, he evidently thought that a fictional ranch didn’t need a terribly accurate map. So he drew Reno to the west of Carson City. Dortort noticed. “They put it together; they brought it to David Dortort; he looked at it,” Richardson said. “He said, ‘I love it, but your directions are wrong.’” Looking at it as it was designed, the map shows Reno to the west of Carson City. In reality, Reno sits to the north. To fix it, Ayres drew a compass. But instead of the north arrow pointing straight up as on most maps, it goes off in a vaguely west-northwest direction. To look at the map in its correct orientation, one would have to flip it on its side, with the “horn” of the property pointing upward. “To justify the inaccurate locations the way they had them drawn, they had to slant the compass a different way,” Richardson said. “It was too late at that particular time in 1959 for them to redo the map, because again, it was hand-drawn, and they were going to start shooting the opening sequence."


Dortort had donated most of his papers and memorabilia to the Autry a year or so before his death last September at the age of 93. He had held on to the map however. After he died, his family gave it and other objects to the museum.
Posted by Ruth at 4:26 PM No comments: Links to this post 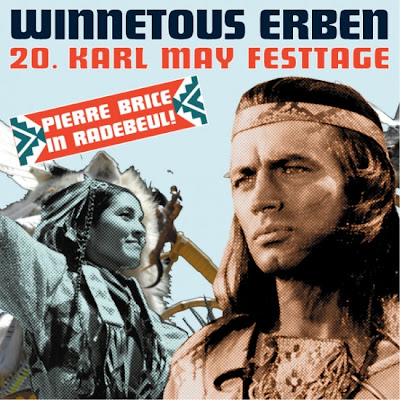 
This year, two of the biggest Karl May festivals in Germany are celebrating milestone anniversaries.

The Karl May Festtage in Radebeul -- the town outside of Dresden where May lived, and where there has been a Karl May Museum since the 1920s -- marks its 20th anniversary with this year's edition, June 3-5.

Special feature will be the participation of Pierre Brice -- the French actor who won fame (and stole the hearts of girls all over Europe) by playing Winnetou in the German-made movies in the 1960s. I myself was one of these girls -- I saw my first Winnetou movie ("Old Shatterhand") in Prague in 1966, and I still have the pictures of Brice I bought or cut out of Czech magazines at the time.

In addition, the Karl May Spiele in Bad Segeberg, north of Hamburg -- the biggest and oldest Karl May Festival -- is celebrating its 60th anniversary this season! The festival runs from June 25-Sept. 4 and will feature a performance of "The Oil Prince" -- based on Karl May's classic book -- on its outdoor stage. Erol Sander stars as Winnetou, and Joshy Peters as Old Shatterhand (I saw Peters in this role in 2003). 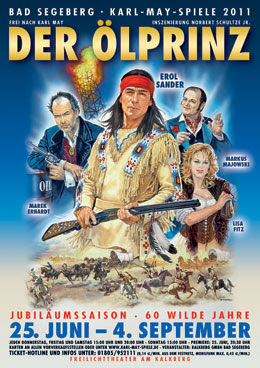 Email ThisBlogThis!Share to TwitterShare to FacebookShare to Pinterest
Labels: festivals, Karl May


For the program of this year's wonderful European bluegrass festival at la Roche-sur-Foron, France (at the foot of the Alps near Geneva) -- click HERE

Hey -- I just came across the blog Westerns... all'Italiana -- which dedicated to "the preservation, investigation and all things related to European films and personnel involved with the western genre."

Great stuff! (I just snagged from it in my previous post the interview with Gojko Mitic.)
Posted by Ruth at 7:26 PM No comments: Links to this post


The blog westernsallitaliana, which is devoted to western movies, posts an interview with Gojko Mitic, the legendary Yugoslav-born actor who played the Indian hero in East German Defa movies and also, after the fall of the Wall, played Winnetou at the Bad Segeberg Karl May Festival.

He was immensely popular -- when I saw him perform as Winnetou at Bad Segeberg in 2003, the crowd chanted "Goj-ko! Goj-ko!" when he appeared and surged forward to shake hands and get his autograph.


Mitic, now 70, was taking part in a film festival in Linz Austria this month where some of the 12 DEFA "Indianer" films were shown. The Austrian News Agency APA conducted the interview with the "Winnetou of the East."


APA: You are known as the "Winnetou of the East", is this a compliment?

Gojko Mitic: I don’t mind, because I'm already used to it. When the GDR still existed, they gave me a nickname: I was called "Indian chief" because I starred in the DEFA films as different Indians. Then when I appeared in Bad Segeberg for 15 years and 1,400 performances at the Karl May Festival, the writers like you, gave me that name.

APA : "Red Westerns" are something completely different than the American Western.

Mitic : Of course, I grew up with the US-Western. I can remember that we were all glad when John Wayne appeared. But I never wanted to be an Indian, because they were "evil". In retrospect, I realize that we have done them wrong. We were the ones who came to their country and decimated them. These Indians, who I played did not meet the American stereotype. It was researched more at the DEFA films, they were stories of real Indians retold. These films were for me, a bit of an attempt to correct the story.

Funnily enough, when I actually met Gojko Mitic -- at the Karl May Festival in Radebeul, Germany a few years ago -- he was dressed as a cowboy. Dana Weber (who has done here PhD dissertation on Karl May Festivals) and I interviewed him -- I'll see if I can find the transcription and post it.

Posted by Ruth at 7:19 PM No comments: Links to this post

The Toy Hearts is a charming (and talented) family band (father and daughters) from the UK, which is veering into country from more bluegrassy strains. They give a great show -- and I'm happy to present here their just-released new video, "The Captain".

Posted by Ruth at 2:22 PM No comments: Links to this post

Russia -- US Cowboys (and the cattle industry) bring ranching to Russia

Voice of America -- VOA -- reports that Americans are bringing cowboys and cattle ranching to Russia:

Darrell Stevenson, an American cowboy and cattle rancher, is not riding the black earth country of Russia to film a western movie.

Posted by Ruth at 7:22 PM No comments: Links to this post

My friends, the French country due Steve & Heather, will be featured next month in Nashville at global artists events  during the Country Music Association  Festival, June 6-7.

The husband-and-wife act are actually a  French-American duo, as Steve is French and Heather is from the US -- though she has lived many years in France.

It's a particular recognition for Steve & Heather -- who perform in French as well as English and are a mainstay of the many country music festivals and events held throughout the year in France -- as all the other international acts on this year's roster come from English-speaking countries (Canada, Australia, New Zealand, UK) that have produced many country acts and even some big name international stars (Hank Snow, Keith Urban, etc).

The AristoMedia Global Show is held Tuesday, June 7, at noon/CST at famed downtown honkytonk The Second Fiddle. Hosted by Australian sister trio The McClymonts, performers at the AristoMedia Global Show include High Valley (Canada), Brett Kissel (Canada), Ryan Laird (Canada), Mike & Ashley (New Zealand), Craig Morrison (Australia), Six West (Canada), Springfield (Australia), and Steve & Heather (France). Event sponsors include AristoMedia, CMA, The Second Fiddle, Billboard and Four Seasons Coach Leasing. A free lunch will be offered for attendees.
“This is the fifth year for our Global Events showcases,” says AristoMedia President and CMA Board member Jeff Walker, who organizes the two shows each year. “These shows are a great way to help kick off CMA Music Fest, and it provides a valuable opportunity for some of these fantastic artists to be heard. The talent pool of international Country acts is very deep, and this year’s events are a good balance of up-and-comers and established veterans.”

Posted by Ruth at 9:42 AM No comments: Links to this post