Looks like the second annual Country Christmas in Pordenone, Italy is in full swing; actually the Dec. 8-11 event is winding up today. And here I am in Budapest, not northern Italy....

Country Christmas is a full-fledged country and western festival, like those in Germany and France -- with rodeo-style competitions, shops, other events and even live country music (Buddy Jewell), an element that has been largely missing from the horse and cowboy-action-shooting dominated Italian imaginary western scene.

The Festival web site calls it "the perfect mix of culture, entertainment, spectacle and nature, the ideal occasion for everyone who loves horseback riding and  approaches 'country' also as a real lifestyle. The 'look' of visitors is de rigueur -- jeans, shirt, vest, cowboy boots and Stetson hat, with an attentive eye to the American style of the 1950s."

By Ruth Ellen Gruber
The program for the International Festival of Country Music to be held in February in London's Wembley Arena and other venues is expanding -- Charlie Pride and Asleep at the Wheel have been added to the line-up.  Acts now include headliners  Pride, AATW, Reba McEntire, Ricky Skaggs, and Lonestar, as well as supporting acts Narvel Felts, John McNicholl, Jo-El Sonnier, Will Banister, George Ducas, Sandy Kelly & George Hamilton IV, Raymond Froggatt, and Tim McKay.

Returning to Wembley after more than two decades thus really marks  a symbolic return of big-time country music to the mainstream arts agenda -- and signals a revival of popularity in the genre. As the web site says:

The International Festival of Country Music introduced country music to the British public almost 45 years ago.  The shows, promoted by the legendary Mervyn Conn, ran for 23 years from 1969 to 1991 at Wembley Arena.  Hugely popular, the shows always featured the biggest stars of Country music fans were treated to outstanding performances by artists including; Dolly Parton, Johnny Cash, Willie Nelson, Tammy Wynette, Jerry Lee Lewis, Crystal Gayle and many more.

Now after a gap of 20 years the Festival is back, and one thing that has not changed is world class line-up.

Reba McEntire comments; “My band, crew and I are really looking forward to going back to Europe to play our music. The last time we performed there was in 1999! We have been very busy for the last 10 years doing the REBA TV show and concerts in North America. Now, we are so excited to be able to travel abroad and do both our new and old songs for our European audience, who has always been so good to us.”

Posted by Ruth at 9:34 AM No comments: Links to this post

This week I was in Kosice, in far eastern tip of Slovakia, to attend the annual concert and awards event held there to honor the memory of local son Peter Dula, a Slovak country singer who died of cancer in 2009 at the age of only 28. He had been diagnosed ten years earlier while in the U.S. playing hockey for a junior league in Boston, then got into country music while undergoing cancer treatment back in Slovakia.

I never met Dula (though we were friends on Facebook), but he was a friend of several of my friends in the central European country scene. Dula had fronted the band Veslari -- "The Rowers," Slovakia's oldest country music band, since 2004. With Dula singing, the band won a Slovak Grammy and other numerous  awards including the best European country band of 2007. They also played at the Grand Ole Opry in Nashville in 2007.


After his death, Dula's friends in the country music scene over here decided to honor his memory by each year passing on his guitar to a chosen artist, who would be its custodian for the following 12-month period, creating a sort of "Wayfaring Guitar" as a living memorial.


The guitar is handed over at a concert event where awards are also handed out, inducting chosen artists into "Peter Dula's Country Music Hall of Fame." 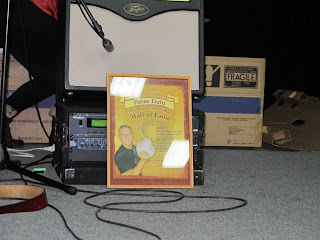 
This year the awards went to my Czech friends Robert Krestan and Lubos Malina, and their band Druha Trava -- I worked with the band on their latest CD, Shuttle to Bethlehem, which features Robert's original songs sung in my English translations.


The concert -- which lasted four hours -- was held in a big theater-type hall in some sort of anonymous facility (a driving school?) on the southern edge of Kosice. The theater was packed, and the atmosphere was good: not raucous, like a German or Polish country crowd; not "tramp" like the Czech bluegrass crowd can be. There was no bar in the place -- so no one was drunk, either! And the only person in a real cowboy hat was Lonstar. (Several of us wore cowboy boots, though....) 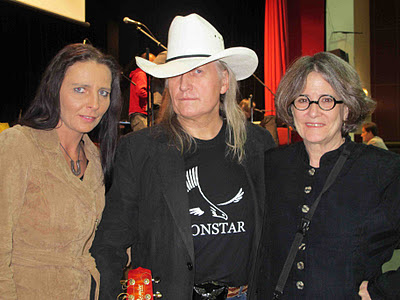 Lonstar, a young Polish singer named Dorota Krawczyk, and a Slovak band led by local singer Laco Sasak performed during the first half of the show. A mix of U.S. songs, and traditional-style originals (sung in English, Polish and Slovak) -- concluding the set with a Slovak version of the song "Cowboy's Gone," which Lonstar wrote in memory of Peter Dula. All the while, pictures of Dula were projected onto the rear of the stage.

Druha Trava was the headline act and played the second half of the show. I've seen them perform a lot, but I've never seen such an enthusiastic audience -- whooping and stomping and cheering, etc. Pretty wild. DT hadn't performed in Kosice in years, and it was as if the audience was just hungry for the music.


At the end of the show, the awards (framed citations) were present, and Peter Dula's wayfaring guitar was handed over into the care of DT.

Then, as the closer, Robert, joined by the other artists, sang the folksong "Wayfaring Stranger", with Dula's picture as a backdrop, which seemed the right way to end the show.

Posted by Ruth at 12:48 AM No comments: Links to this post