But -- it's a good moment to do so, as three of Europe's best Country/Western/Etc festivals are beginning -- all three of them in France, one weekend after the next: the Country Rendez-vous in Craponne; the La Roche Bluegrass Festival in La Roche sur Foron; and Equiblues in St. Agreve.

I've been to all three in the past -- I posted from Craponne and La Roche.   Each festival is quite different, and it would be fantastic to be able to spend three weeks in France going from one to the next and taking them all in. This year, though, it looks as if I will only be able to make it to Equiblues -- which combines concerts, line-dancing and a "scene" with a rodeo.

The annual Country Rendez-vous in Craponne got under way last night, with a five-band set including  ERIK SITBON & THE GHOST BAND (France), CROOKS & STRAIGHTS (Croatia!!), THE STEELDRIVERS (USA), THE TURNPIKE TROUBADOURS (USA) and TWO TONS OF STEEL (USA).

Country Rendez-vous is probably the most prestigious of the dozens of country music and western scene festivals that take place in France each year. Most of the bands are from the U.S., and the Festival's savvy director and guiding spirit, Georges Carrier,  travels to the U.S. each year to make contacts and see bands. The Festival also has representatives on the ground in Nashville and Austin.

The La Roche Bluegrass Festival is one of the biggest and friendliest of the scores of bluegrass festivals that take place each year around Europe. This year there are 30 bands from 14 countries. All the concerts are free, and there are lots of street events in the lovely town of La Roche. The festival also entails a band contest. 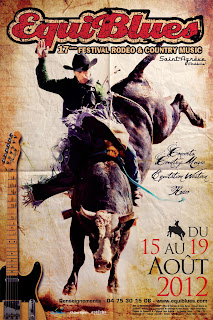 If all goes well, I will make it to Equiblues for the first time in some years.

Different from the other two festivals, it combines country music with a full-fledged rodeo -- there is lots of line-dancing and a colorful "western market" scene. Equiblues was one of the first European western festivals I attended, and I am eager to see it again. I still have a special bottle of Equiblues wine that I purchased the first time!